Straight from the Senate - Issue 28

1. I recently had the opportunity to travel with Save the Children to visit the Zaatari refugee camp in Jordan. It was a profoundly moving experience.

The 80, 000 residents of Zaatari live in the desert. The temperatures reach 40 degrees, although it feels hotter in the texts, corrugated iron structures and repurposed shipping containers that make up the camp. We got the chance to talk to some of the children about their experiences. Almost half the population of the camp are children, and thousands were born there and have known no other home. I saw how international aid is making a real difference to them and their families, including providing them a chance to receive an education. The displacement of people by the Syrian conflict is one of the great humanitarian crises of our time. The government’s cuts to the aid budget are unconscionable. We need to shoulder our share of responsibility to help. You can watch my speech to Parliament about my experiences below. 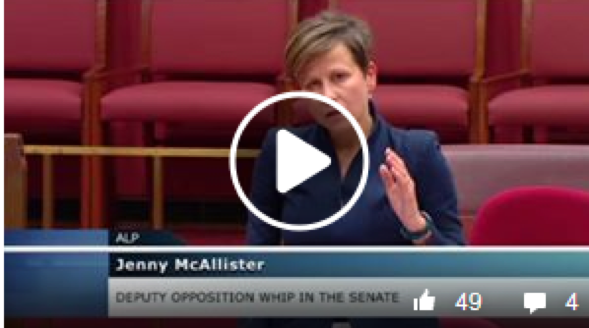 2. On Wednesday I spoke in the Senate in support of establishing ‘an independent judicial inquiry through COAG following allegations of theft and corruption in management of water in the Barwon-Darling Basin.’

The allegations raised by the Four Corners program are serious and disturbing. Theft of water is not a victimless crime – it harms communities and vulnerable ecosystems up and down the river system. These allegations must be properly investigated.

This week the Coalition party room voted to stop the Parliament doing its job and voting on marriage equality. Instead, they have proposed a non-compulsory ‘postal plebiscite’ on the question. On Thursday Labor Leader Bill Shorten MP explained why the Labor Party does not support a divisive and expensive postal plebiscite where gay and lesbian Australians will be told they and their families are second-class citizens. You should also listen here to what Labor Senator Penny Wong had to say on why allowing hate speech against gay and lesbian Australians is never ok and will never be tolerated by the Labor Party.

Labor have real concerns about this plebiscite. That is why our Senate team are moving to give a committee the power to inquire into how the postal plebiscite is conducted. As chair of that committee, I will have more news for you about my committee’s work in the coming weeks. I look forward to being able to hear from the community, and to ask the government, the ABS and the AEC the serious questions we all have about how this vote is being conducted.

Labor supports marriage equality and we want it legislated through a free vote in the parliament. However, if this postal plebiscite is to go ahead, Labor will be encouraging all Australians to vote ‘YES’ to give gay and lesbian Australians the same right to marry the one they love that other couples currently enjoy. This is fundamentally a question of equality. Love is love. Please vote YES to build a more equal Australia.